“Her musical hardware produces a lovely sound, at times almost human, with fine intonation and excellent control of vibrato.”

I play the Lame Sonore since 2011. The instrument is popularly called “musical saw”. In French the musical saw is called “scie musicale”, in Dutch “zingende zaag” (lit. singing saw). The Lame Sonore is not often played, especially not in the Netherlands.

Together with pianist Nanke Flach I regularly perform “an unusual concert”. Unusual because during the concerts we alternately perform classical works for Cello and Piano, and for Lame Sonore and Piano. Unusual also because of the concert locations. Besides performing at regular stages, we played at several unusual locations.
For example, we performed during the “Kunstnacht” (Art Night Festival) in Den Bosch, in the Museum of Instruments in Eelde (near Groningen), participated in the grand concert of the NNO, Noord Nederlands Orkest (NNO) in the Oosterpoort, Groningen and were invited to play on Dutch Radio4, live broadcasted from the Concertgebouw in Amsterdam. But we also played in an old wine cellar, in a former sugar refinery and  at outdoor music festivals like Mañana Mañana.

The jury  about our concerts at Sicily:

Our performances are received warmly and called surprising.

After our performance at the grand concert in De Oosterpoort, we received a letter from which I quote:

“Our guests were very enthusiastic and especially appreciated the way they were surprised and touched by a performance in such a modest setting. We think this evening the musical saw has been shown in a splendid way”. 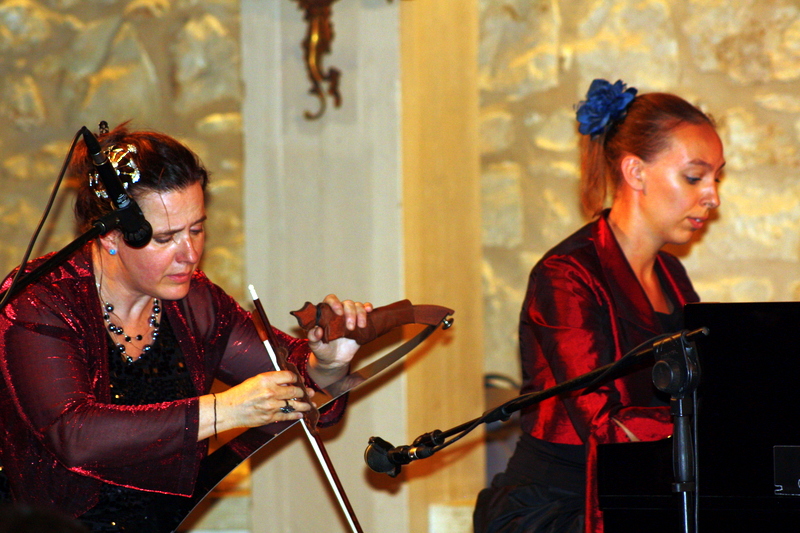 My fascination for the Lame Sonore

A few years ago I fell under the spell of the melodious sound of the musical saw. I bought a concrete saw and tried to produce a sound from it with a bow. After a week I managed to play Happy Birthday on it. Via the firm Stiggelbout in Groningen, specialized in western and non-western percussion instruments, I ordered my first musical saw.

Looking for greater sound reproduction and a more beautiful sound, I found the French version of the musical saw: The Lama Sonore. This “Stradivarius” among the saws has a reach of 3 ½ octaves. The French Lame Sonore builder Alexis Faucomprez built one for me in 2011.

Playing the Lame Sonore gives me an inner musical enrichment. Because only one manual has been written for this instrument I have had to invent the wheel again in several areas. Think of a completely new technique of bowing, new manners of phrasing, finding the right playing position and conquering technical dilemmas.

A number of composers just after World War II wrote some small compositions for the Lame Sonore. On my repertoire there are compositions by the composers Honegger, Koechlin, Dom Clémant-Jacob, Joseph Canteloube and Henri Sauget. Also music written not specifically for Lame Sonore, but f.i. for cello or singing voice, is suitable to be played.

Recently, several composers from a.o. The Netherlands, France and the US, have been composing music for our duo (Annette Scholten, lame sonore and Nanke Flach, piano). Soon, we hope to record a CD and include some of these pieces.

History and origin of the Lame Sonore (musical saw)

Someone who plays the musical saw is called a “sawist”. A sawist of great importance for the French “musical saw world” was Jacques Keller (1900 – 1988). Not only was Jacques Keller the designer of the “Lame Sonore” and of a special handle of this saw, he also wrote the only serious manual for the musical saw so far: “La Lame Sonore”. His performance drew the attention of a few composers, who wrote a couple of (short) pieces for him. The composer Arthur Honneger was inspired by his performance in such a way that he wrote a solo for musical saw in his opera Antigone. After World War II the Lame Sonore was used several times in the role of precentor during Mass. The sound of the musical saw shows to advantage under the vaults of an old church. In the French village where I often stay, I regularly practise in the church and I am often asked to play during Mass.

Many stories about the origin of the musical saw make their rounds. It is said that woodcutters in South-America, Scandinavia or in Appalachia (U.S.A.) discovered that if you bow the saw in a certain way it can produce a singing sound. It speaks for itself that in any place a saw is played this idea can have originated.